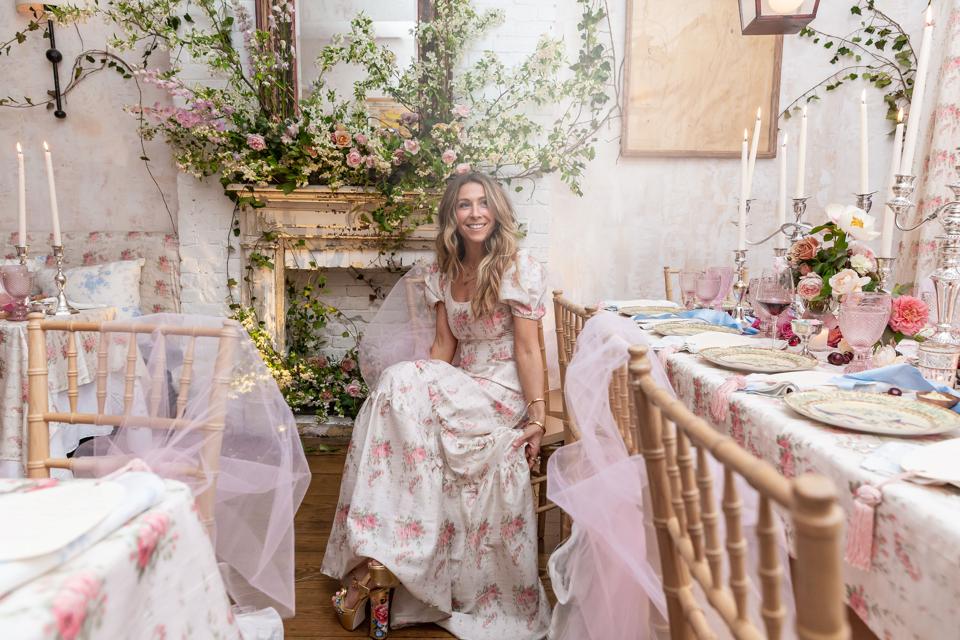 “People are wanting that connection to something that feels like a happy path and story,” says the fashion designer and entrepreneur, Rebecca Hessel Cohen, about LoveShackFancy, the womenswear brand she started 6 years ago. Cohen’s line of modern, vintage, victorian-meets-edwardian-meets-floral collection were born at her wedding. She designed dresses for the bridal party that would be easy to move in, easy to dance in, and easy to live in. The result was a chiffon halter—feminine but flirty, sexy but demure. It was the dress that, proverbially, launched a thousand dresses.

Cohen and I are at her family summer home in Watermill, New York where she hosted a dinner in collaboration with milliner, Nicolas Fouquet. It’s golden hour and the property is bathed in late summer shimmer laced with a light, warm breeze.

The home, where she spent her childhood summers and where she was married, is a 19th century farmhouse sat within an orchard and framed with rolling country gardens. A small gardening shed with walls comprised of antique french doors is coming slightly undone with perfectly peeling paint. The shed contains one of the two dinner tables at the party and is set with linens new to the LoveShackFancy collection. Whimsical floral centerpiececs of dusty pink roses and lavender decorate the tabletops, and the property is scattered with oversize pillows and blankets in the grasses for lounging. It’s magical.

The event is a manifestation of what Cohen does so impeccably—she has a very specific vision from which she doesn’t deviate, a vision which she executes down to every miniscule detail. It’s why LoveShackFancy is what it is, because she is unwavering on its offering at every touch point, giving her consumers the opportunity to tell their own story, while being a part of the one she’s created.

“It’s always a vignette, it’s always a story, it’s always more to it,” she says, “Yes it’s the dress, but it’s the story you tell in the dress. Life, stories and all of the emotions and nostalgia goes into all of it.”

Her attuned sense of storytelling has provenance, one could even argue it’s in her blood. Her mother, who is an integral advisor to Cohen in life and in business, was the Creative Director of Seventeen magazine for two decades. Cohen, herself, had a long standing career in fashion publishing as an editor at Cosmopolitan, making meticulousness in storytelling something of a family business.

“It’s always a vignette, it’s always a story, it’s always more to it,” she says, “Yes it’s the dress, but it’s the story you tell in the dress. Life, stories and all of the emotions and nostalgia goes into all of it.”

It starts with the sourcing, where Cohen personally chooses everything that goes into the collection, from the lace and trims to the prints she will use, of which all are hand painted. She scours the vintage markets at Bath, Portobello and Paris. She oversees the quality of the embroidery, which is all hand done.

She is personally invested in understanding customer feedback, whether it means speaking directly to her customers in her store or reading each individual remark on her social media feeds, she wants to know how people are reacting. At the dinner, she is hands on and leaving nothing up to chance. She double checks the placement of each dish at the buffet and is contemplating the most pleasing position of the smudge sticks guests will burn later. She’s making sure that the layering of each pillow placed over lace, placed over blanket, placed over seating, is perfect.

You’re probably curious about how a brand for which whimsy and freedom as its the center communicates those ideas under such a careful curation. While Cohen aims for her personal vision of perfection, that includes a sense for that which is hardly perfect at all—it’s the LoveShack part of LoveShackFancy.

“It’s why women identify with it, because it isn’t so precious, there’s this level of undoneness,” she says. “It’s the most imperfectly perfect.”

Everything changed for the company when she opened her first retail store in Sag Harbor. Early on, after going back and forth between deciding to sell with big department stores or stay in small boutiques (she decided small boutiques were the way after some experiences with department stores that didn’t work for the brand), she knew she had to create a place that brought to life Cohen’s vision in a palpable way. The Sag Harbor store was born and it was so successful that it pulled in what the brand would sell in an entire year in the first two months.

“People walk into the space and feel connected to it, they get to really feel it and be a part of LoveShackFancy,” she recalls. “Less than a year later we opened Bleecker [street] and now people are coming to the store as a destination, they want to have the experience. It’s a place where there is interaction, where people want to trade in vintage or getting an interesting array of products.” The stores don’t just carry her brand, by the way. She wants to give her customers everything that excites her, knowing it will excite them, and if it isn’t by her, then that’s ok.

She lets out a girlish laugh when I ask her about who she is as a business person. “Oh my god, I am the worst businessperson ever, it’s a miracle I have a business,” she says through the laughter. She quickly lets me know that she LoveShackFancy wouldn’t be what it was if it weren’t for her husband, the real estate entrepreneur Todd Cohen, who acts as her business partner. “I would probably have zero people working for me if it weren’t for him. He manages the business and the financial aspects, and he guides me.”

Her husband feels differently, and through a smile, says that she’s much better at business than she lets on. “No one can sell her product better than she can. From the beginning, she saw a gap in the market and with LoveShackFancy she’s fulfilled a niche which is key to any successful business,” he says. “She never faulters to keep the integrity and unique identity of the brand through different channels like web, social, brick and mortar and beyond. Her work ethic is 24 hours and she knows what she wants, she embodies the brand and is working even in her sleep.”

“At the end of the day, we are a mom and pop company,” the designer says. “My mom still helps, Dean, my best friend who is a photographer lays the bricks, my husband is my partner.”

The real story here, is that Cohen has succeeded over and over because she stays true to her instinct.

When she went to department stores, they said they would only carry the brand if she changed the name to LSF–LoveShackFancy wasn’t sophisticated enough. She didn’t. When she was told her brand aesthetic didn’t make sense, she didn’t change it, she stayed on the path. When she went the big retailer route even though it wasn’t a part of her plan, she quickly went back to the original philosophy of selling in small boutiques and direct to consumer. Now, she has a healthy and profitable business.

“At this time, I think people are craving to relate to things that feel authentic and feel real,” she says, and it’s certain Cohen is helping to satisfy that craving.